Chronic obstructive pulmonary disease (COPD) is a disease state characterized by airflow limitation that is not fully reversible. This newest definition of COPD, provided by the Global Initiative for Chronic Obstructive Lung Disease, provides a broad description that better explains this disorder and its signs and symptoms (National Institutes of Health [NIH], 2001). 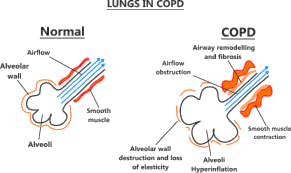 While previous definitions have included emphysema and chronic bronchitis under the umbrella classification of COPD, this was often confusing because most patients with COPD present with overlapping signs and symptoms of these two distinct disease processes.

COPD may include diseases that cause airflow obstruction (eg, emphysema, chronic bronchitis) or a combination of these disorders. Other diseases such as cystic fibrosis, bronchiectasis, and asthma were previously classified as types of chronic obstructive lung disease. However, asthma is now considered a separate disorder and is classified as an abnormal airway condition characterized primarily by reversible inflammation. COPD can coexist with asthma. Both of these diseases have the same major symptoms; however, symptoms are generally more variable in asthma than in COPD.

People with COPD commonly become symptomatic during the middle adult years, and the incidence of COPD increases with age. Although certain aspects of lung function normally decrease with age (eg, vital capacity and forced expiratory volume in 1 second [FEV1]), COPD accentuates and accelerates these physiologic changes.

In COPD, the airflow limitation is both progressive and associated with an abnormal inflammatory response of the lungs to noxious particles or gases. The inflammatory response occurs throughout the airways, parenchyma, and pulmonary vasculature (NIH, 2001). Because of the chronic inflammation and the body’s attempts to repair it, narrowing occurs in the small peripheral airways. Over time, this injury-and-repair process causes scar tissue formation and narrowing of the airway lumen. Airflow obstruction may also be due to parenchymal destruction as seen with emphysema, a disease of the alveoli or gas exchange units.

Early in the course of COPD, the inflammatory response causes pulmonary vasculature changes that are characterized by thickening of the vessel wall. These changes may occur as a result of exposure to cigarette smoke or use of tobacco products or as a result of the release of inflammatory mediators (NIH, 2001).

Chronic bronchitis, a disease of the airways, is defined as the presence of cough and sputum production for at least 3 months in each of 2 consecutive years. In many cases, smoke or other environmental pollutants irritate the airways, resulting in hypersecretion of mucus and inflammation. This constant irritation causes the mucus-secreting glands and goblet cells to increase in number, ciliary function is reduced, and more mucus is produced. The bronchial walls become thickened, the bronchial lumen is narrowed, and mucus may plug the airway. Alveoli adjacent to the bronchioles may become damaged and fibrosed, resulting in altered function of the alveolar macrophages. This is significant because the macrophages play an important role in destroying foreign particles, including bacteria. As a result, the patient becomes more susceptible to respiratory infection. A wide range of viral, bacterial, and mycoplasmal infections can produce acute episodes of bronchitis. Exacerbations of chronic bronchitis are most likely to occur during the winter.

In emphysema, impaired gas exchange (oxygen, carbon dioxide) results from destruction of the walls of overdistended alveoli. “Emphysema” is a pathological term that describes an abnormal distention of the air spaces beyond the terminal bronchioles, with destruction of the walls of the alveoli. It is the end stage of a process that has progressed slowly for many years. As the walls of the alveoli are destroyed (a process accelerated by recurrent infections), the alveolar surface area in direct contact with the pulmonary capillaries continually decreases, causing an increase in dead space (lung area where no gas exchange can occur) and impaired oxygen diffusion, which leads to hypoxemia. In the later stages of the disease, carbon dioxide elimination is impaired, resulting in increased carbon dioxide tension in arterial blood (hypercapnia) and causing respiratory acidosis. As the alveolar walls continue to break down, the pulmonary capillary bed is reduced.

Consequently, pulmonary blood flow is increased, forcing the right ventricle to maintain a higher blood pressure in the pulmonary artery. Hypoxemia may further increase pulmonary artery pressure. Thus, right-sided heart failure (cor pulmonale) is one of the complications of emphysema. Congestion, dependent edema, distended neck veins, or pain in the region of the liver suggests the development of cardiac failure. 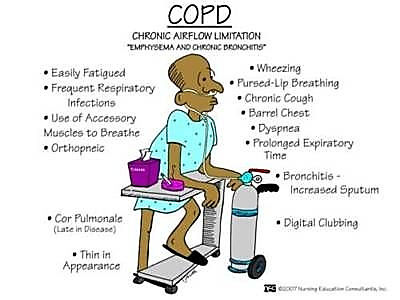 Often the patient cannot participate in even mild exercise because of dyspnea; as COPD progresses, dyspnea occurs even at rest. As the work of breathing increases over time, the accessory muscles are recruited in an effort to breathe. The patient with COPD is at risk for respiratory insufficiency and respiratory infections, which in turn increase the risk for acute and chronic respiratory failure.

There are two major life-threatening complications of COPD: respiratory insufficiency and failure.

Diagnosis and assessment of COPD must be done carefully since the three main symptoms are common among chronic pulmonary disorders.

Healthcare providers perform medical management by considering the assessment data first and matching the appropriate intervention to the existing manifestation.

Patients with COPD also have options for surgery to improve their condition.

Management of patients with COPD should be incorporated with teaching and improving the respiratory status of the patient.

Assessment of the respiratory system should be done rapidly yet accurately.

Diagnosis of COPD would mainly depend on the assessment data gathered by the healthcare team members.

Goals to achieve in patients with COPD include:

Patient and family teaching is an important nursing intervention to enhance self-management in patients with any chronic pulmonary disorder.

To monitor and manage potential complications:

During evaluation, the effectiveness of the care plan would be measured if goals were achieved in the end and the patient:

It is important for the nurse to assess the knowledge of patient and family members about self-care and the therapeutic regimen.

Documentation is an essential part of the patient’s chart because the interventions and medications given and done are reflected on this part.