Bronchiectasis is an obstructive lung condition in which there is destruction and widening of the large airways and abnormal bronchial wall thickening as a result of a recurring cycle of infection and inflammation (Ten Hacken 2010). Bronchiectasis is usually localised to one lung segment or lobe but may spread over time to other parts of the same lung as a result of unresolved infections. Exacerbations are associated with infections.
A number of conditions lead to bronchiectasis, including structural lung conditions, CF and other conditions associated with abnormal mucocillary clearance; retained inhaled foreign objects, tumours and obstructive lung conditions including COPD; an abnormal immune response; infections including tuberculosis, pneumonia, measles and whooping cough; and inflammatory bowel disease. 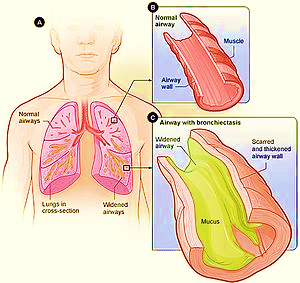 Causes
Bronchiectasis may be caused by a variety of conditions including:

TREATMENT
Treatment is focused on getting enough oxygen to meet current needs of the patient, expel mucous, and treat infections.