Cystic fibrosis (CF) is the most common fatal autosomal recessive disease among the Caucasian population. An individual must inherit a defective copy of the CF gene (one from each parent) to have CF. Cystic fibrosis is usually diagnosed in infancy or early childhood, but patients may be diagnosed later in life. For individuals diagnosed later in life, respiratory symptoms are frequently the major manifestation of the disease. 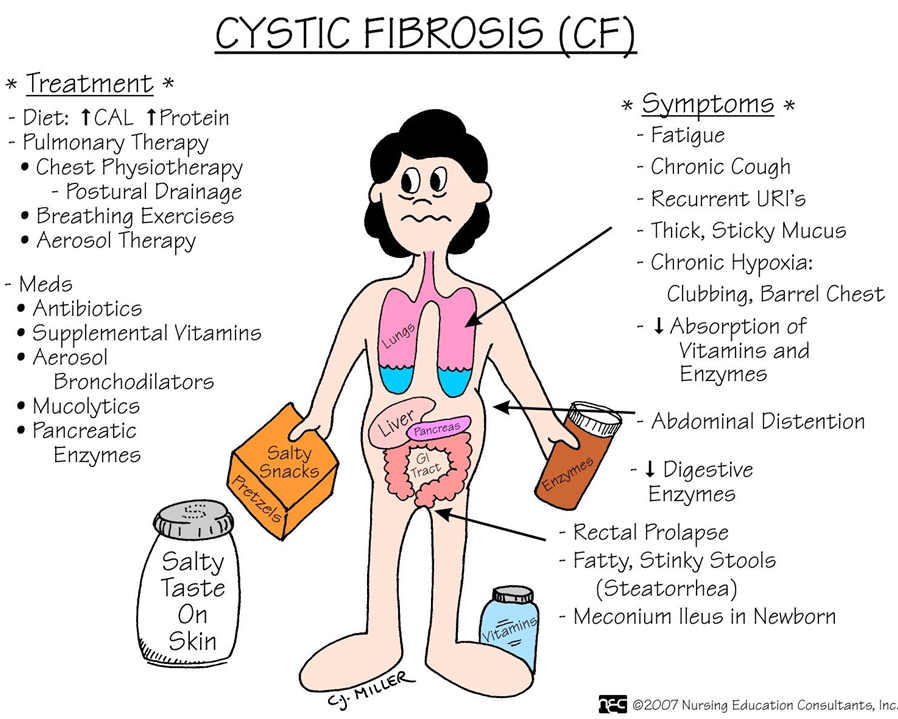 Pathophysiology
This disease is caused by mutations in the CF transmembrane conductance regulator protein, which is a chloride channel found in all exocrine tissues. Chloride transport problems lead to thick, viscous secretions in the lungs, pancreas, liver, intestine, and reproductive tract as well as increased salt content in sweat gland secretions. In 1989, major breakthroughs were made in this disease with the identification of the CF gene. The ability to detect the common mutations of this gene allows for routine screening for this disease as well as the detection of carriers. Genetic counseling is an important part of health care for couples at risk.
Airflow obstruction is a key feature in the presentation of CF. This obstruction is due to bronchial plugging by purulent secretions, bronchial wall thickening due to inflammation, and, over time, airway destruction. These chronic retained secretions in the airways set up an excellent reservoir for continued bronchial infections.

The pulmonary manifestations of this disease include;

Most of the time, the diagnosis of CF is made based on an elevated result of a sweat chloride concentration test, along with clinical signs and symptoms consistent with the disease. Repeated sweat chloride values of greater than 60 mEq/L distinguish most individuals with CF from those with other obstructive diseases. A molecular diagnosis may also be used in evaluating common genetic mutations of the CF gene.

Medical Management
Pulmonary problems remain the leading cause of morbidity and mortality in CF. Because chronic bacterial infection of the airways occurs in individuals with CF, control of infections is key in the treatment.

Nursing Diagnosis
Based on the assessment data, the major nursing diagnoses are:

Nursing Management
Nursing care of the adult with CF includes assisting the patient to manage pulmonary symptoms and to prevent complications of CF.